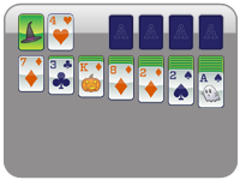 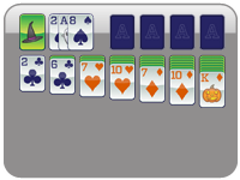 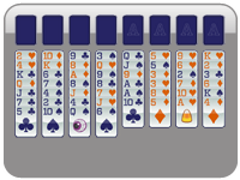 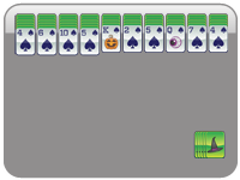 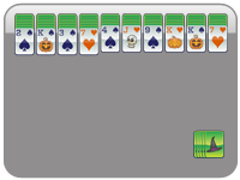 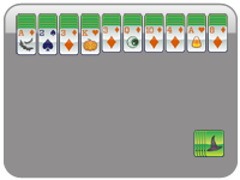 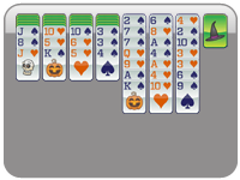 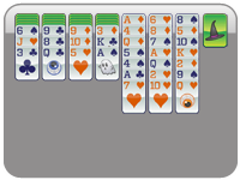 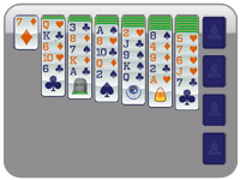 Ready to face your biggest Solitaire card game nightmare? Then Yukon Halloween Solitaire is the game for you! Deemed as one of the most challenging versions of Solitaire, only the most daring can defeat this puzzle game! The goal of Yukon Solitaire is to move all of the cards from the tableau to the four suit foundation piles located on the right side.

Yukon utilizes one deck of cards. Cards are dealt into 7 columns, with one card in the first column, two cards in the second column, etc. Very similar to Klondike Solitaire, cards within the tableau need to go downward in sequence, alternating black and orange. But there's one spine-tingling catch! Any face up card can be moved to a sequence and it doesn't matter whether the cards on top of that card are in order or not! Cool huh! So let's say Column 1 has a black King. Column 3 has an: orange 5, orange 2, orange Queen, black 7 and black 4. You can move the Q-7-5 onto the black King!

Yukon Halloween Solitaire will keep you bedazzled for hours! It's a very challenging card game to win, but once you're able to win a game you'll feel bigger than Frankenstein!!! For extra added fun, dare your friends to play the game at the same time and see who can win a game first.

DISCLAIMER: The games on this website are using PLAY (fake) money. No payouts will be awarded, there are no "winnings", as all games represented by 247 Games LLC are free to play. Play strictly for fun.